Hello all you lovely people!

Today, I’m excited to be part of the Storytellers on Tour book tour for J.E. Hannaford’s debut The Skin which is out today! 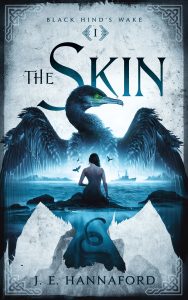 ‘I know. But, when we die, all that is left are shadows of our lives preserved in the memories of those who remain. I plan on leaving an exceptionally long shadow, filled with ripples of moonlight for those I helped, and darker than the worst of nightmares for those who wronged us.’

How far would you go to save your skin?

I’m a selkie, trapped above the waves until I can recover my skin. Humans used to call us seal-wives many years ago – before they broke the planet. I thought that less humans, after the warming, would mean less danger. My kind believed our world was finally recovering.

Up here, the magic is fading and Old Ones like me are being traded as trophies for rich and powerful humans to display in collections.

Without the Old Ones, the magic fades, without magic, the planet dies.

Humankind has gone too far and someone has to put a stop to it, I just wasn’t expecting it to be me.

As the selkie begins her hunt, far to the south on his enormous pleasure ship, Barge, Lord Sal hunts for missing Old Ones with a grand plan to leave his own mark on the world. Icidro and Prince Ulises are searching for them too, and this is a world where money talks louder than morals.

I was lucky enough to beta read this for Jenny and I absolutely loved it from the start. It’s a fantastic story with a vivid setting and great characters. The story kept me guessing and clamouring for more! (No pressure for the next one, Jenny!)

Storytellers on Tour are also hosting a giveaway for a paperback copy of The Skin (in the UK/EU only) and some other bookish swag! So go to the link and check that out, or if you want to grab a copy right now (and you should!) then head over here and grab an ebook. And add it to your goodreads here so you can see all the rave reviews The Skin is already getting!

To celebrate this momentous occasion I have invited Jenny to do a fun (I hope!) interview and we’ve challenged each other to draw a magical creature from The Skin.

Welcome, Jenny, and congratulations on your publication! The Skin follows selkie, so why write about selkies and other mythological creatures?

Why not? Seriously though, I think it has a lot to do with being contrary. I don’t like overly sanitised versions of folklore or princess stories where the love of a man is essential for the survival or happiness of a female protagonist. I have nothing against a well written fantasy romance, as long as there is more to the story than the romance, and they are often my comfort reads. But, that wasn’t what I wanted to write. The selkie, much maligned for their seemingly helpless nature in many folklore tales, has deeper roots. You only have to look at the powerful stories from the Faroe islands to see that. I wanted to take a character type who is often seen as helpless without her skin and people, and show that she is far from that, and can grow to be a power all of her own.

If you could wear (and remove!) the skin of any animal, like a seal selkie skin, what animal would you pick and why?

I’ve been thinking about this one since you said you were going to ask me! I ‘m finding it hard to pick. I do love seals, wolves and polar bears. But, I think, I’d like to wear that of a dolphin to travel around the coast. It was a close run thing with some sort of migratory goose, as I’d love the ability to fly, without the constraints of the land.

A good answer! I think a sea bird would be a wonderful choice too. Keeping on the same theme, if you could make one creature from mythology and folklore real, what would it be?

After all this, actually, I’d love for it to be selkies. I mean, who says they aren’t real? Try telling that to a pack of seals, looking at you with incredible intelligence.

My family were very boat and sailing orientated as I was growing up. My father has done some transatlantic yacht racing, and my mother has raced the wrong way around the world on Spirit of Sark In the Global Challenge. My brother raced dinghies all over the country. I sailed a very temperamental wooden dinghy with a friend once a week. We were the only ones who never sank it. Once it capsized, it would scoop a load of water up, then slowly fill through the centreboard casing. As for how it impacted the writing; there is a scene in chapter three lifted from my mother’s experiences aboard a yacht in storms.

What’s your favourite fact from the world of marine biology?

As limpets – those conical shells you find clinging to their perfectly-formed home-scars on beaches – grow bigger and older, a large proportion will have changed sex from male or neutral, to female.

What’s a fun fact that people might not know about you?

I own an 8 foot tall inflatable stegosaurus costume which I wandered around our town wearing, to make kids smile in covid lockdowns. I even wore it shopping in Tesco.

You’re given the opportunity to write the sequel to any story (whether a book or a film or a TV show!), what story do you choose and why?

I love The Dragon Prince animated series. I’d love to do something with that, because it would be something my son could watch.

And now for the challenge…

Jenny challenged me to draw Aria, a wind sprite. And here’s what I came up with… 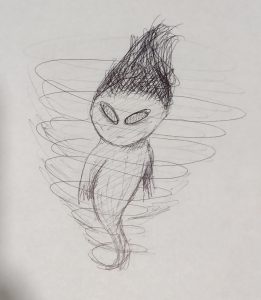 I think we can all see why I chose writing instead of drawing or painting!!

And for Jenny’s challenge, I asked her to draw Eryn, selkie’s sister, whom we meet in the first chapter of the book.

Doesn’t she look great?! Jenny’s drawn her with her sea holly as well.

I’m so thrilled that The Skin is finally out there for you all to enjoy and I hope you’ll grab a copy.

And this is only the start of the Book Tour! Keep your eyes out for the other posts coming this week from other bloggers! 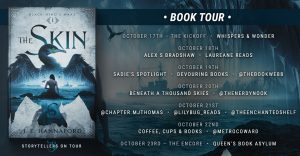 Pat yourself on the back and take a breath. It looks like 2021 is bringing the same energy as 2020, but I am keeping my fingers crossed it’s just the aftershocks of 2020 and it will all calm down soon.

I’ve realised that it’s been a while since I’ve done an update on the blog so what better time than the new year?!

There are now regular updates being sent out in my monthly newsletter (if you’re not already signed up for it, you can sign up here!) so if you want to be the first to get the news then that’s the best place to be!  In fact, last month I sent out a kind of preview of the cover for Windborn and showed off the concept sketch that has become the basis for the final cover. Now, because I don’t want you to miss out I’ve also put it below!

From now on the blog will only really be used for big updates, like release dates or cover reveals, and the other updates like letting you know how the writing’s going and generally sharing cool stuff (like book recommendations!) will be on the newsletter.

The plan at the moment is to release Windborn in mid to late February, but once I have the date nailed down I will be posting an update! I’ll also be sharing a snippet of Windborn soon and hoping to sort out a nice cover reveal with the lovely folks at Storytellers On Tour.

I think that’s it for now!

Until next time, be kind, be well, and be happy!