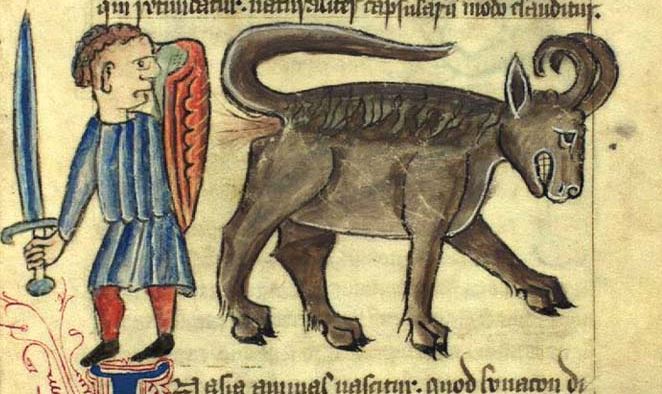 Medieval bestiaries are full of the weird and wonderful. But mostly the weird. So in the first of what will hopefully be a long series I bring you one of the wierder and less wonderful of the beasties that I’ve found in my perusal of medieval bestiaries: the Bonnacon, an acidic poo flinging bison like creature from the mountains of Macedonia.

And you can see a lovely illustration in the Kongelige Bibliotek in Denmark:

If that picture isn’t enough to put you off meeting one then surely the facts will:

It sounds pretty dangerous, or at least very unpleasant to deal with but as you can kind of see from the illustration its horns aren’t there for it to be dangerous. “[Its] horns, however, so much bent inwards upon each other, as to be of no use for the purposes of combat” are also described as “crooked, turned inwards towards each other and useless for purposes of self-defence”.

And for some reason it’s dung only has this quality when it’s disturbed or alarmed; if you befriended one you could handle its dung as much as you wanted, or at least not have to worry about mucking out its stalls. But if the dung was only acidic at certain times, was it a concious decision? Could they make their breeding-poo-fort acidic on the outside but cosy on the inside? Okay, maybe cosy wasn’t the word to use for a fort made entirely of excrement.

I love the sheer outlandish nature of one bodily function, not only that has become in the telling some sort of siege weapon but also siege defences.

So my advice to you would be this: if you are hiking the mountains of southern Macedonia and in your travels come upon a fort made of excrement and inhabited by bison, do not startle them. Move slowly away and try to avoid any hailing clods of burning poo.

Sources: Aristotle, The History of Animals; and Pliny the Elder, The Natural History